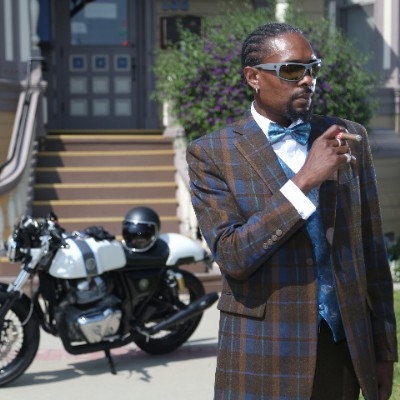 Year 2 of my Distinguished Gentlemen's Ride has come to an end. Much love and many thanks to those who helped along the way; either with donations or behind the scenes. The journey continues as we continue to Live Tweed & Ride Dapper for a well worthy cause showing support for those we love. 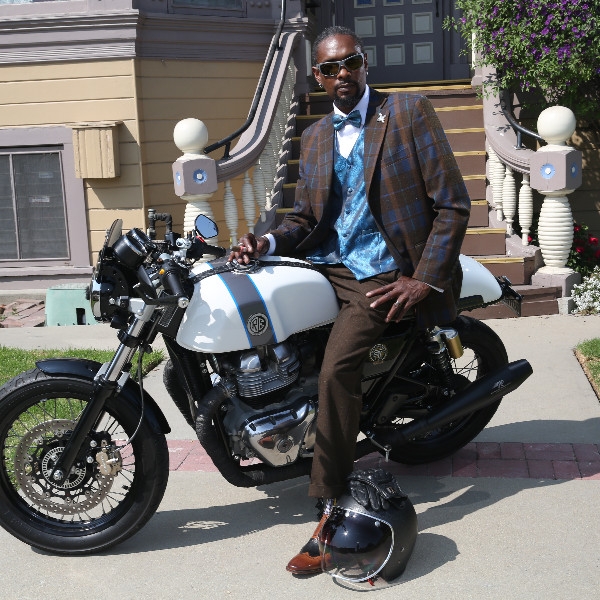 The day is almost upon us to dapper up and ride on... 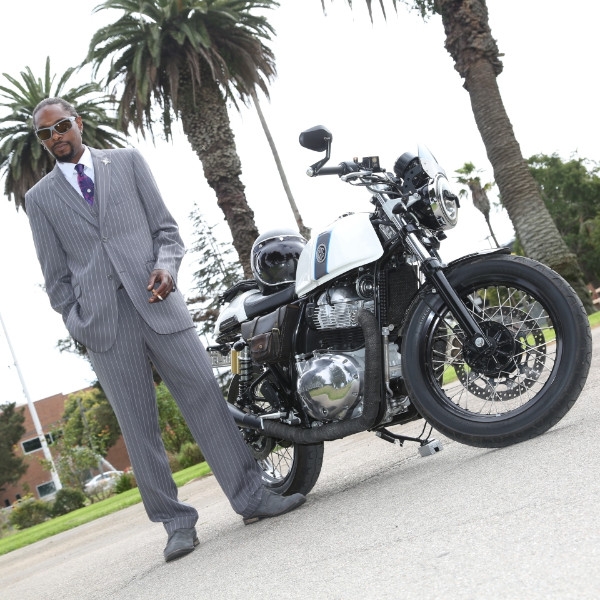 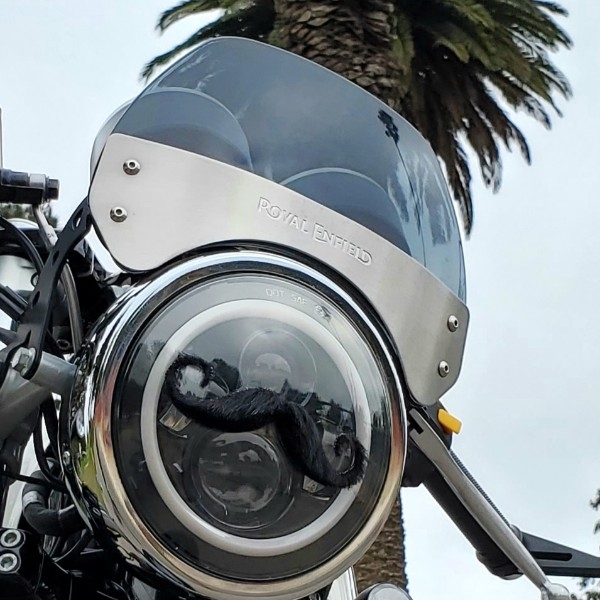 Not quite Salinas; but a part of the "Salad Bowl" nontheless... Castroville is home to the "Giant Artichocke" and everything else artichoke related. Built in 1972 by Rey Bei the choke stands 20 feet tall and 12 feet wide. 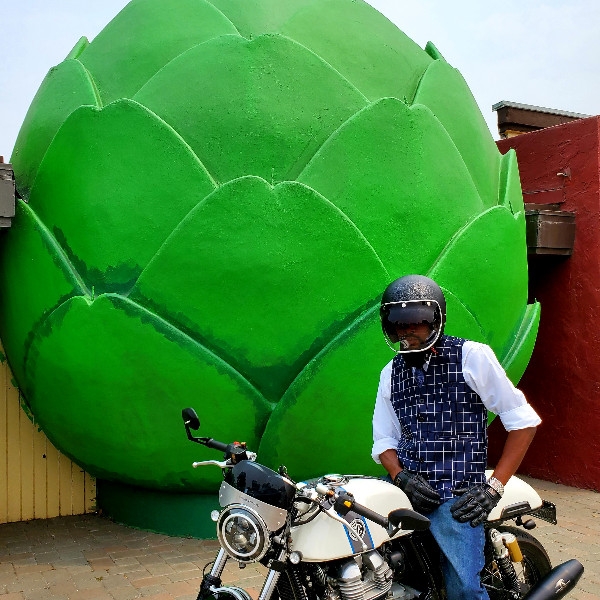 "Hat In Three Stages Of Landing"

Salinas is a major stop on the professional rodeo circuit. The Salinas Rodeo(pronounced the Spanish way: "roDAYo") began in 1911 as a Wild West Show on the site of the old race track ground, now the Salinas Sports Complex. The rodeo was inducted into the ProRodeo Hall of fame in 2008. The Sausal Park Race Track was the predecessor of the California Rodeo Salinas. In 1872, a racetrack, grandstand, bar, and restaurant were constructed on 69.4 acres. The first race was held in 1875. The Monterey Fair Association was incorporated and the racetrack was also used by the Pacific Coast Trotting Association. In 1878, the park was renamed Sherwood Park. By 1909, the popularity of the races had decreased dramatically, and the future of the property was in question when it was given to the city. The solution for the city came from a group of cattlemen who thought that having bucking horses in between the races would  draw more interest from the public.

On August 1, 1911 the first Rodeo was held at the racetrack grounds. It was advertised as a Wild West Show. Because it ran for a week, Iver "Red" Cornett wanted to call it "Big Week". Frank Griffen wanted to call it "The California Rodeo". Both names are used today.

The Rodeo in 1912 was larger than the year prior. This was the year Cowgirls were included as well as a performance by the "Black Cowboy", Jesse Stahl. He competed in bronc riding twice; once forward, the other facing backward. Jesse Stahl retired 1929 and is arguably the most-well known Black cowboy in history.

Officially titled "Hat in three stages of landing" the artwork was built by Claes Oldenburg in 1982. It's meant to depict a single hat tossed from a rodeo cowboy as it floats to the ground. Oldenburg perforated the hats to make them look like salad bowl colanders as a nod to Salinas' claim to be "The Salad Bowl Of The World". 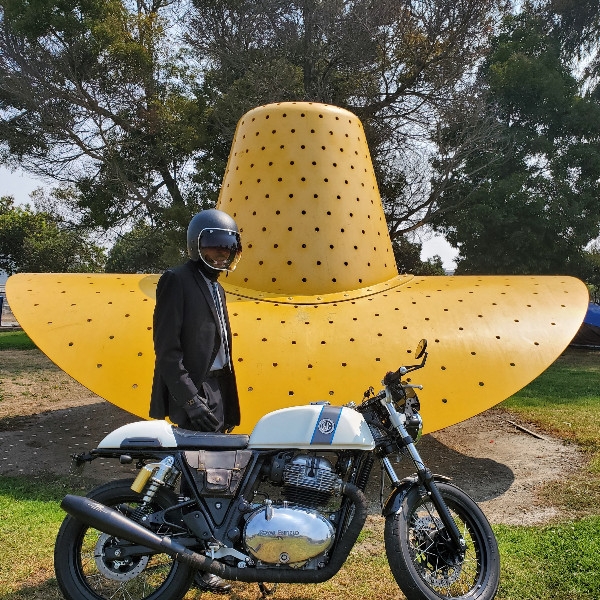 No Man Is An Island

Lee Abellana a.k.a "Basic Lee" is a world class, all around artist from the Monterey Bay, California. He specializes in a variety of styles with mediums that range from brush strokes to spray paint. Influenced by life's constant struggles and the beauty of the natural and the spiritual that surrounds us with limitless imagination and style that reflects his vision to a higher level. 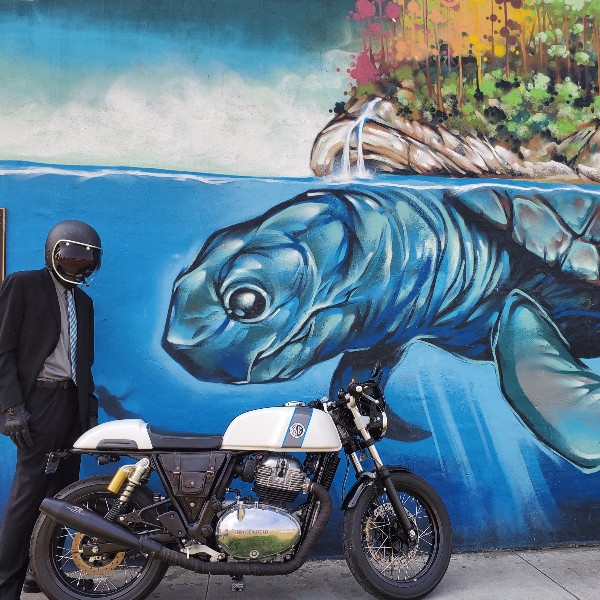 "A Sad Soul Can Kill You Quicker Than A Germ"

"In the souls of the people the grapes of wrath are filling and growing heavy, growing heavy for the vintage."  -John Steinbeck 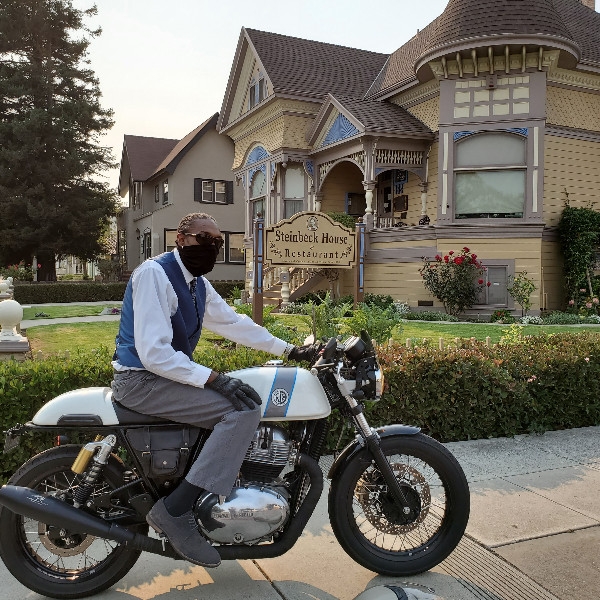 On Sunday September 27th I am riding solo in Salinas in The Distinguished Gentlemen's Ride. The Distinguished Ride is a themed rideout across the globe to help raise awareness and funds for prostate cancer research and men's mental health. Last year more than 100,000 distinguished gentlefolk donned their finest cravats, pressed their tweed and took to their modern classic and vintage motorcycles for rideouts in over 650 cities across the globe. The 2020 ride is gonna look a little different as we "Ride Solo Together", to maintain socially distanced but globally connected. Just because we're not riding in groups, does not mean we aren't out here....        SALINAS; Do You Wanna Ride? 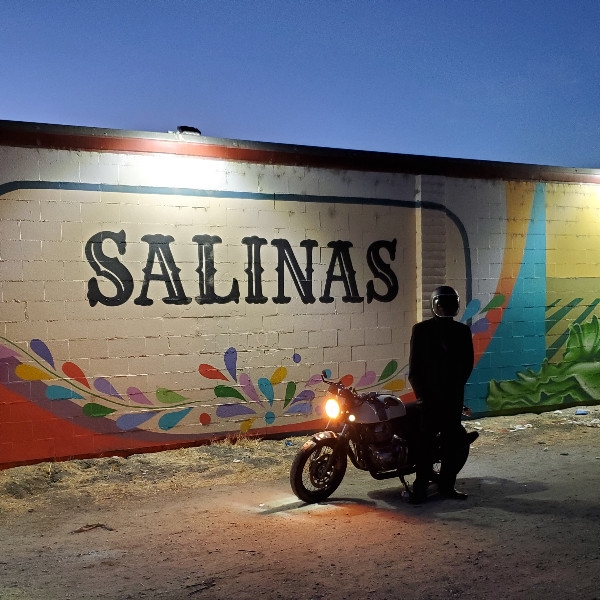 Going for back to back... 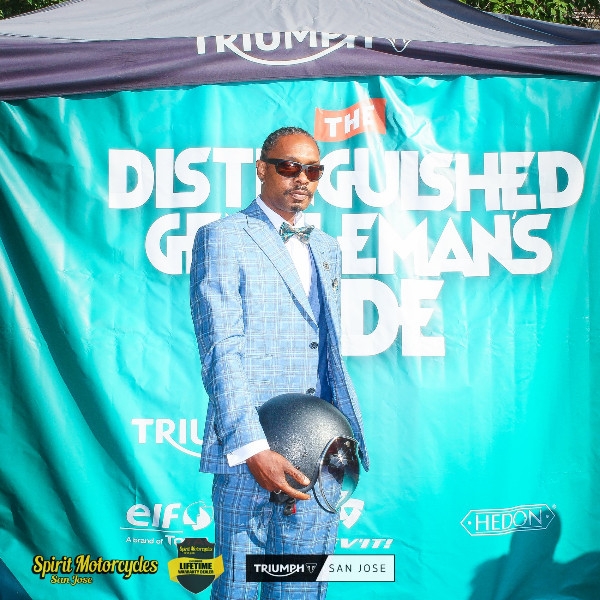 My Team - The Bowl Ryders

Velvet Jones A.k.a B Smith

Safe travels friend. May the Gods bless you and all your adventures.

Great cause, great look, thanks for taking us along for the ride!!

Always Be strong, be positive, live and enjoy your life ❤️

Burn Rubber; Not Your Soul

Have fun on your ride.

I don't know you personally - only from the RE Facebook page - but you're a natty dresser and an RE man, and that's good enough for me. Good luck and good riding, brother.

I appreciate you and what you're doing. The world needs more gentlemen like you.

Brian, thanks for helping out a great cause and looking so good when you are doing it.

if thiers one hobby i support of yours its disc golf. If there's two its being a distinguished gentleman. 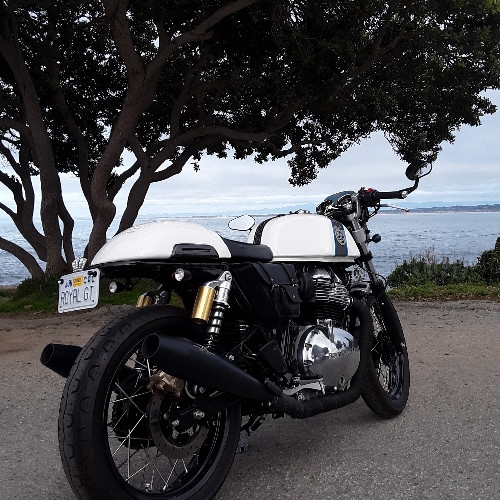 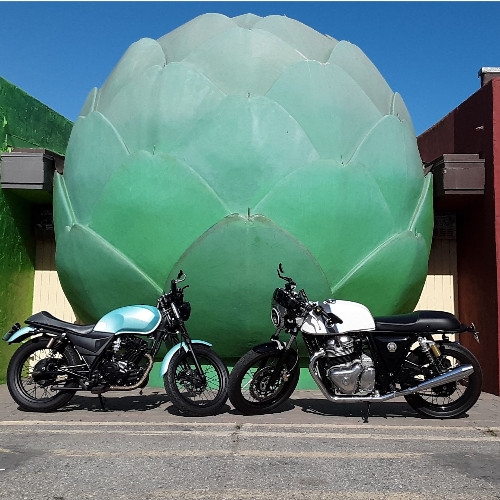 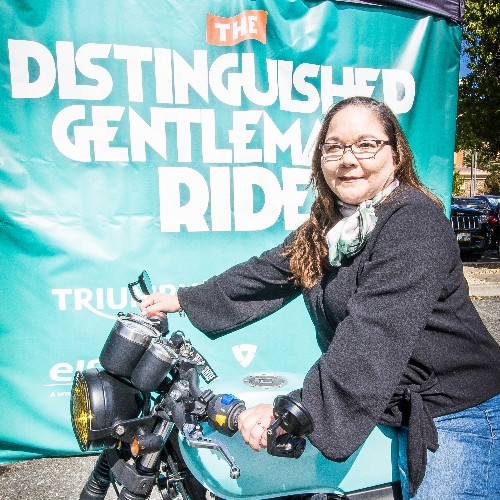 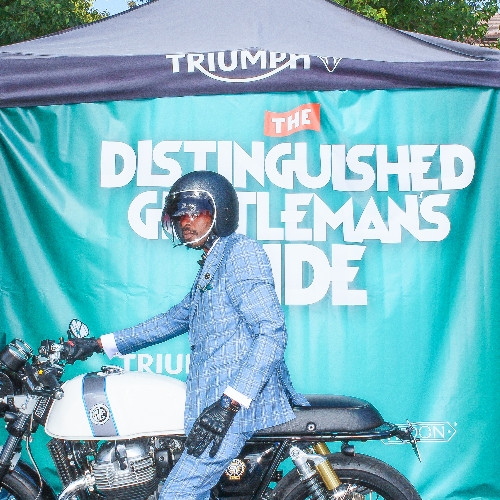 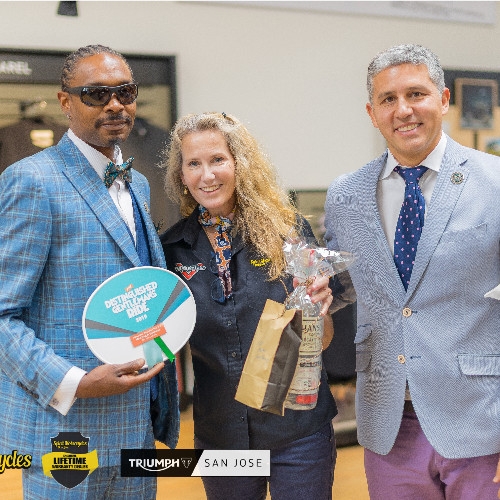 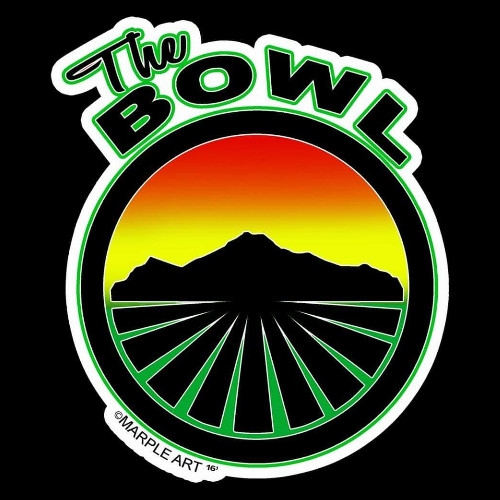 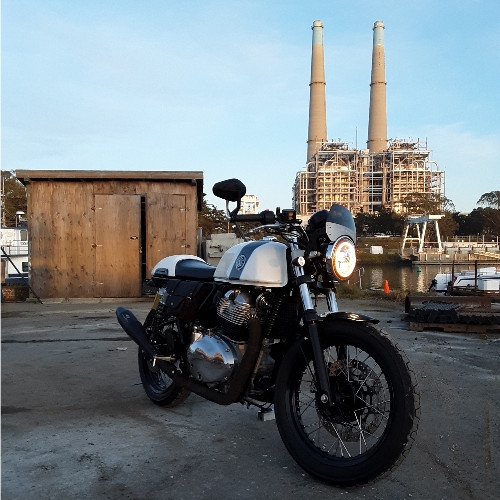 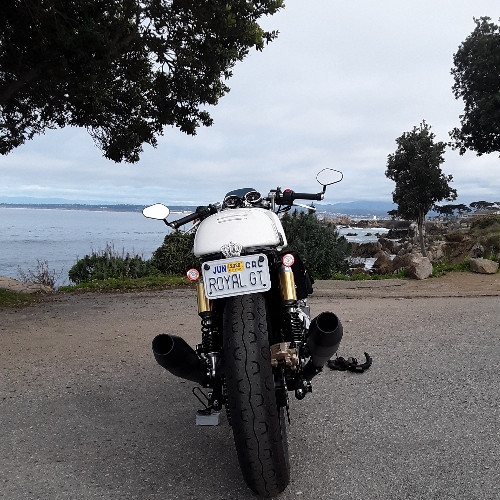 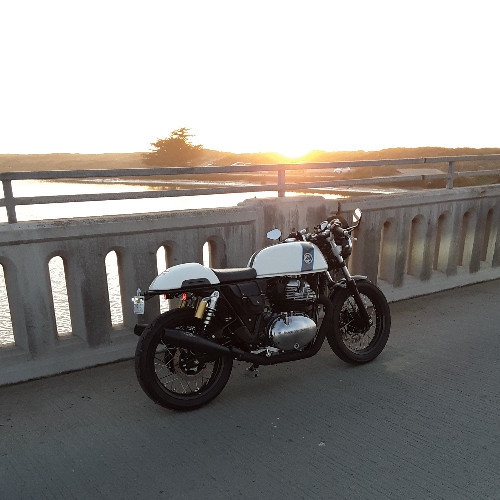 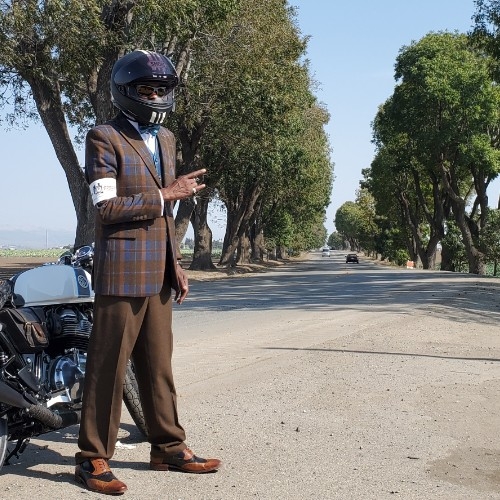 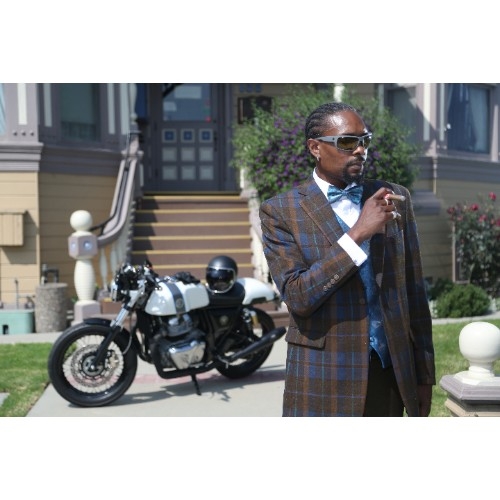 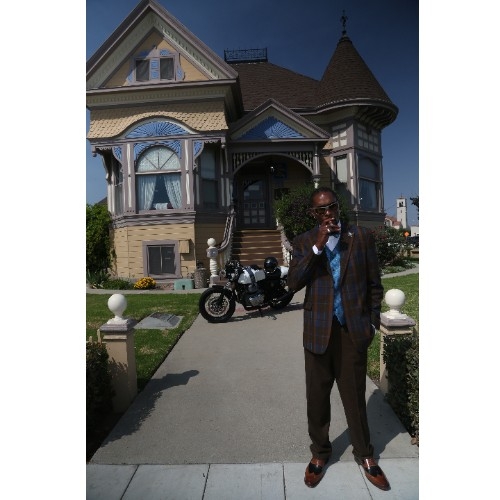 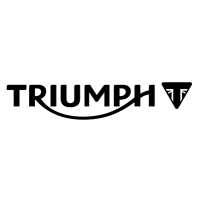 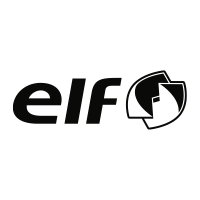 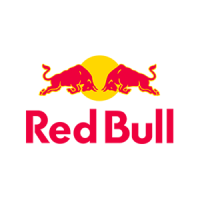 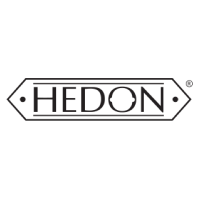 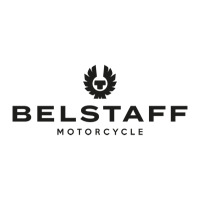 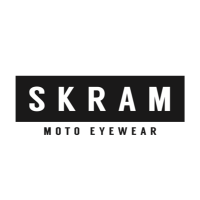 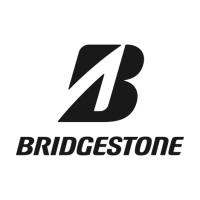